At the launch party for my biography of Frances Darlington in November last year a conversation with Sue Dalton (Director of Ripon Museums), resulted in my reuniting my research with my artistic practice. I had first been in touch with Sue to ask permission to photograph a piece of Frances’s work, The World War One Memorial to boys from St. George’s Police Orphanage in Harrogate. 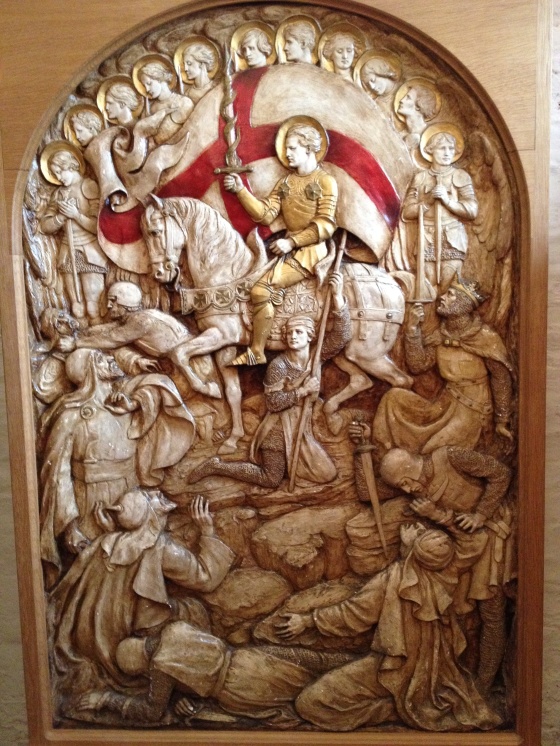 The memorial is an intricate piece of work, and aligns heroism with the knightly ideals of neo-medievalists of the early twentieth century. In the chapter on it in the book I had cited Arthur Machen’s story The Bowmen, published in the Evening News on 29th September 1914, which had been inspired by various reports of visions at the front line. Machen told of a vision of St. George, and although published as a comforting piece of fiction was taken by the desperate and distraught ones left behind to be a true story. I wrote:

Frances’ panel likewise depicts the traditional stuff of crusades: Christians triumphing over Saracens and Turks, and the same imagery that Machen employed in his story. The whole is based upon religious and historical associations which were fluid within the British public mind at the time. The Islamic spiked helmets are also pointedly reminiscent of Bismark’s German spiked helmets. Joan of Arc, dressed in chain mail and with bobbed hair somehow announces a type of female strength, modernised by the war. Joan of Arc had become a popular figure in France since her beatification in 1909. The same year Parisian hairdresser Antoine, first cut womens’ hair (and later that of Coco Chanel and Josephine Baker) into what the French called the “Coupe a la Jeanne D’Arc”; the bob which would find huge popularity in later years. Following the publication of Machen’s story, more visions were reported from the front, some even claiming to have seen Joan of Arc. Allied soldiers took images of Joan of Arc with them into the battlefield. She appeared on French stamps, posters, and on the cover of the October 1918 edition of Red Cross Magazine, she appears alongside St. George and George Washington. …

St. Joan of Arc is the only female in the St. George’s panel and is isolated and inactive amidst all of the fighting, but she is strong and resolute and their spiritual protector. Her steadfast yet passive role is quite an accurate analogy for what most women, mothers, sisters, wives, daughters, were actually able to do in the First World War: to wait behind, to take on male roles in industry etc., and to pray while men were ferried off on trains to fight until almost certain death. In retrospect there is something almost pivotal in her representation after a war which saw women’s contribution to society completely transformed. Frances is combining the visual languages which she had made her own in her earlier works: the medieval figures and costumes are utilised to express a moral ideal with a strong religious, historical and romantic current of ideas propagated at the time.

Aligning all this with my own political and historical appraisals to create an honest piece of contemporary art was a challenge. Perhaps it is something to do with my Scottish education, but part of me shunned the overt Red Cross English patriotism. The man who had unveiled it in 1918 had been a military figure at the Easter Rising. However the knightly analogies were of great interest, not because I concurred with romanticising war like this, but because of my interest in the way mid to late nineteenth and early twentieth century culture looked to medievalism amid drastic modern innovations.

My response to it is woven from three main threads:

1. WAR, the tragic reality of war amid the romanticised images of valour Frances was adhering to.

2 KNIGHTS, the shifts in social change resulting from the war amid reversion to older ideals, romanticised notions of nobility (see 1), the notion of a God given right to fight opposing the true beliefs of religions.

My first thoughts were sketched out as quarterings of a pre-Raphaelite head, with gun sights, helmet, shield, interlocking through animation eventually ending up with modern woman. My end results are pretty close to this initial set of ideas. 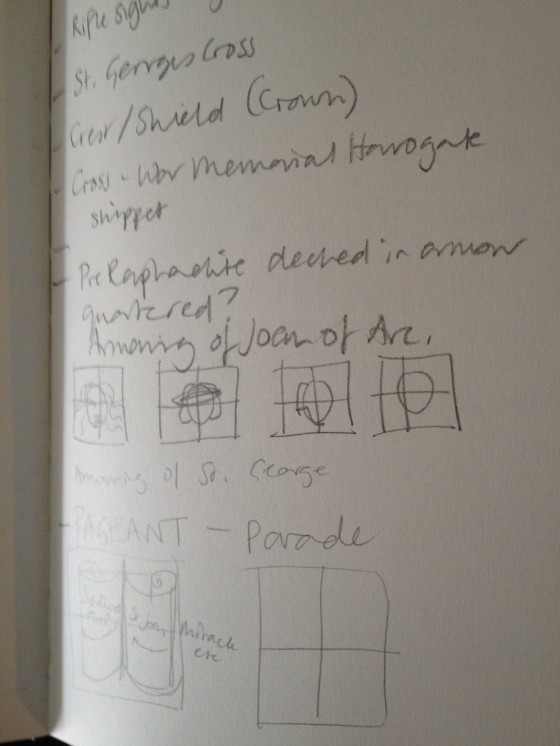 Joan of Arc merges to Epstein mask in a projection on a shield. 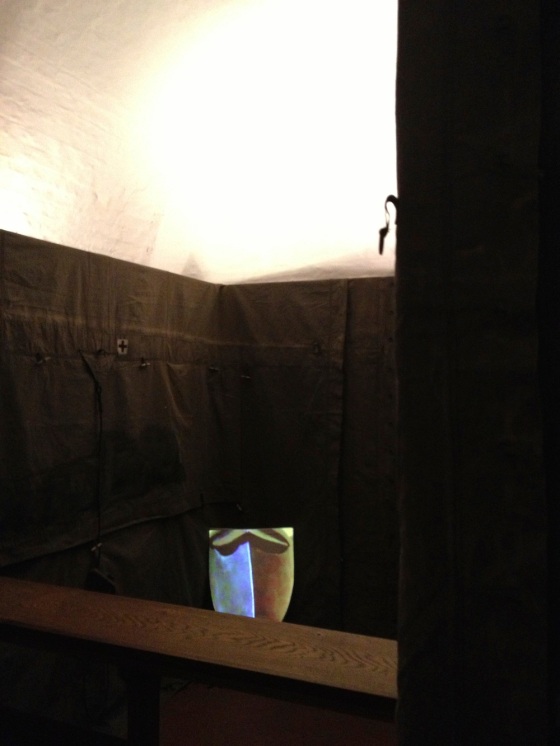 The artwork had to be a response, my response as an artist, to the memorial as a whole, and this meant including all I knew about it, who it was made by and the context it was made in. It seems strange to acknowledge women in a response to a war memorial and they are rarely remembered in monuments. Women were not allowed to join the army, they weren’t allowed to vote and they had only just been granted the right to keep their own earnings if they were married! (The Married Women’s Property Act 1882). There was little they could do except volunteer to be nurses. Of the thirty-seven boys mentioned in the St. George’s War memorial, ten were killed. I attempted to pursue a line of research into their regiments through Forces War Records, but came up with too many possibilities, and much as I would have liked to have done this, there was insufficient time to research this properly.

Joan of Arc features strongly in Frances’s piece, a steadfast woman amid the fight, but I wanted her to look as horrified by the prospect of war as all the people I had read about. I wanted her to represent men and women in fear and bravery, and I wanted the mask of the twentieth century to be almost forced upon her, as mechanised war seemed to be forced upon millions of young men. Almost as a resistant human being trapped in their time. I thought of the pacifists shot for not wanting to fight, of those caught up in the war merely because they were of the right age and gender, and this enforced mask delineates and remembers them. The film has two “borders” which show at the beginning, a made up pageant from an old film, juddery and tinted it aims to represent the past ideals, and the way the war was linked to them, and at the end a simple cycle of a spade digging a grave, with a crucifix in the background. It is old footage and seemed to signify the digging of trenches and the digging of graves and the colossal waste of good young lives. Although Joan of Arc died for what she believed to be right and true, the film, The Passion de Jeanne D’Arc represents an important point for this piece. Often spoken of as “sacrifice”, a sacrifice is something willingly given, not forcibly taken. While many joined up in the sense of fighting for a rightful cause, others were forced. It begged the question of autonomy and power – whose sacrifice was it? (And this seemed to collar the shift in social hierarchies as much as the notion of war memorials). In some consolatory sense Germany was the aggressive expansive force in Europe, it was overriding the sovereignty of other countries and to stop it was the right thing to do. So there is a tension between the rights and wrongs of the war, and of the goods and evils of sacrifice. My only real solid conclusion was that I should create an environment which brought these tensions to the fore, but which also provided a healing and redemptive potential.

The memorial was made for an audience which largely consisted of children in the orphanage, but it had some ideas contemporary with the war woven into it which I felt I needed to break with in my response. The idea of valour and war is dealt with through the idea of Christian Crusaders and Muslim Saracens. These quite clearly have their badges of honour, the cross and the crescent, so I deliberated over my translations of the St. George’s flag to the emblem of The Red Cross, and decided to include the emblem of its sister organisation The Red Crescent. Adding these to the army canvas immediately rendered the tent to a place of healing. The religious symbols took on their own meaning, these are not emblems of war, these refer to beliefs, to faith, most importantly to healing and restoration. As the memorial was in the Prison Chapel it seemed fitting to emphasise the healing aspect of religion which is at its true core.

The idea of a knight’s tomb seemed to fit in with the neo-medieval thematic of Frances’s piece and I wanted one knight’s tomb to reference the shift of war memorials, remembering the many and not just the few.

Side detail of Noble Bloods showing Knight’s tomb with head of twentieth century soldier. Shown in full light of studio prior to installation.

The opposite side of the tent has a companion painting. To accompany the knight’s tomb is his real enemy, evil, caricatured as it has ever been as a serpent. I decided on a serpent bench from Harrogate, looking like one petrified in metal. There are plenty of references to St. George around Harrogate, even the street names “Dragon Parade” evoke something of it. As part of the research I went to visit the site of the Orphanage, now demolished with a new housing estate built on top of it. All that remains is part of the mock-medieval wall. The benches date from the 1880s, so it is possible that the bench which I drew and photographed on Otley Road was contemporary with the orphans remembered in the piece. The Robin was a final remembrance of Frances Darlington, who often included robins and small birds in her work, at times this was representative of resurrection (eg. the panels in St. Wilfrid’s Church, Harrogate) but also as a signature: her nickname was “Dickie” as in “dickie bird”. 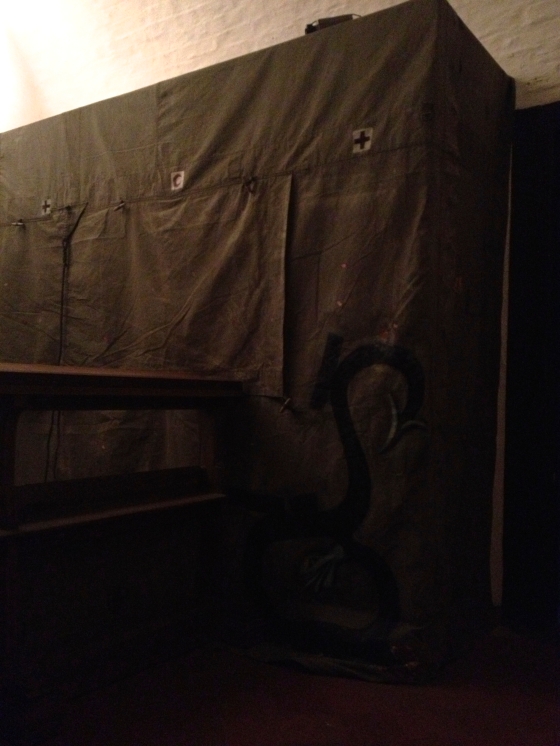 Painted canvas as it appears in the installation.